The USAAF arrived in England in 1942 to join the RAF with one aim: The destruction of Nazi Germany. With a doctrine of high altitude daytime bombing, initially with sparse fighter protection, the Eighth Air Force went forth into battle. But the determined fighter pilots of the Luftwaffe, together with the fearsome anti-aircraft guns of the ground defenses took a heavy toll. It quickly became obvious that fighter would be required to play a decisive role in the campaign. And this they did.

Under great Flight Commanders such as Hub Zemke and Don Blakeslee, the Eighth continually developed and honed their tactics, and it was only a matter of time before this mighty force achieved priceless domination of the skies over Europe. It is on record that the fighters probably made the biggest single contribution to the ultimate victory in the air war in Europe.

Robert Taylor’s spectacular painting features the fighters of the Eighth in a busy scene on a wartime airfield in England, as the fighter squadrons prepare for mission to Germany. The redoubtable P-47 Thunderbolts start-up and taxi out for take-off, while overhead P-51s climb out to join the bomber force, already en-route to the target. The scene is set in 1944, and the early model P-47s and P51s have already seen two years hard combat.

This custom framed collector’s piece is personally signed by six of the most distinguished Fighter Aces ever to fly with the Mighty Eighth: 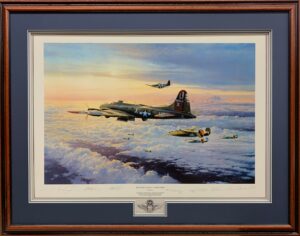