A powerful edition depicting ‘Operation Vengeance’ the famous mission to shoot down Admiral Yamamoto in April 1943, signed by iconic Aces who flew on the raid.

Doug Canning breaks radio silence to call the sighting of Admiral Yamamoto’s flight over the pacific island of Bourganville, 18 April 1943.

After a two and a half hour, four hundred mile flight just above the waves, mission leader John Mitchell and his 16 ship raiding party push their P-38s to full power to complete one of the most remarkable ambushes in aviation history.

Each print is signed by EIGHT of the P-38 Lightning pilots who flew the most successful intercept mission of World War II:

Issued with a companion Pencil Print: As a tribute to the countless personnel who played vital roles behind the scenes, some at great personal risk, to enable the success of the Yamamoto mission, this exclusive edition of just 50 Publisher Proofs was issued with a matching-numbered companion print reproduced from an original drawing by Robert Taylor.  Each companion print is personally signed by four ground crew personnel who contributed in a significant way to the success of the Yamamoto mission, as well as another P-38 Ace who flew on the mission, making a total of THIRTEEN signatures. 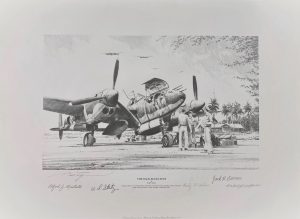 Ground crews on a forward island strip brief a P-38 Pilot on the readiness of his aircraft for flight following a repair of battle damage, Guadalcanal 1943.

Be the first to review “BOGEYS! 11 O’CLOCK HIGH” Cancel reply