BATTLE FOR THE ISLANDS

A stunning tribute to the USMC Corsair Pilots in the Pacific

Corsairs of VMF 121 provide close air support to the US landings on Rendova, June 30, 1943. Fiercely contested, the invasion force was heavily attacked by Zero fighters and Mitsubishi G4M1 “Betty” bombers, flying from their base at Rabaul.

Dog-fighting at tree-top height, VMF 121 Corsairs rip into a bunch of Betty bombers as they try to make their escape following their attack on shipping. On fire, the Betty in the foreground is doomed, and will shortly become one of 19 Japanese aircraft accounted for by VMF 121. Other Marine fighter units brought the total this day to a staggering 58 enemy aircraft destroyed.

Photo of the three veterans holding the original painting during the signing in Ojai, CA – 1999
From L-R – Bruce Porter, Jim Swett and Bob Baker. 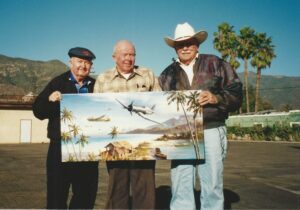 Be the first to review “BATTLE FOR THE ISLANDS” Cancel reply