TYPHOONS OVER THE RHINE

Mk1B Typhoons of 247 Squadron, based at Eindhoven, make a low-level attack against enemy river transport on the Rhine in November, 1944. Led by Squadron leader B.G. “Stapme” Stapleton, the 247 pilots continue their attack along the valley, strafing German transport and other targets of opportunity. The Hawker Typhoon established itself as the finest ground-attack fighter of World War Two.

Flying low level at high speed through intense ground fire was all part of the daily task of the pilots of the Typhoon ground attack squadrons. Armed with rockets, 1000lb bombs and four 20mm cannon, this formidable fighter played a leading role in the Allied advance through occupied Europe. Leading up to, and following the Normandy landings through to the end of hostilities, the Typhoon, flown by determined hard hitting pilots, became the scourge of the German Panzer Divisions, and wrought havoc with enemy road and rail communications.

Targets along the Rhine, over one of Germany’s arteries of supply and communication and last line of defense, were given special attention by the Typhoon squadrons. Barges carrying vital supplies, munition trains on railroads hugging the river bank, and the ever present movement of troops and armor toward the battlefront were constantly attacked from the air, and just such a scene is vividly portrayed in Nicolas Trudgian’s new painting TYPHOONS OVER THE RHINE.

Typhoons over the Rhine is authenticated by the signatures of TWO highly decorated Typhoon pilots from World War II.

Every copy of this print is issued with the matching numbered, full-color companion piece, Typhoon Country. 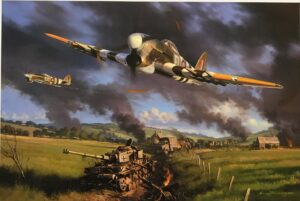 Flight Lieutenant Roy Crane, flying a Typhoon of 181 Squadron from their recently established based in Normandy, makes an attack on a German road convoy in the Falaise area, early August, 1944.  The Typhoons ground attack fighters players a major role in defeating the German armored divisions in the battle of the Falaise Gap.  Every companion is signed by:

Be the first to review “TYPHOONS OVER THE RHINE” Cancel reply