THE BATTLE FOR ITALY PORTFOLIO

This powerful pair of prints featuring the USAAF in Italy during WWII is available as part of a matching-numbered pair.

BATTLE OF THE BRENNER 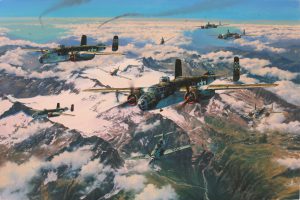 The only way the Germans could re-supply their beleaguered army in Italy against the relentless assault of the Allies pushing northwards was through the Brenner Pass in the Alps. The Allies knew that if they could destroy this strategic labyrinth of road and rail bridges, the enemy would be forced to surrender.

Flying dangerously close to the rugged Alpine Peaks, enduring a pounding from anti-aircraft guns and engaging the last remaining units of the fascist Italian Air Force, B25s from the 340th Bomb Group successfully destroyed a vital enemy rail bridge in the strategic Brenner Pass, northern Italy, 10 April 1945. The enemy Me109s are completely routed by escorting P51 Mustangs of the 325th Fighter Group who are quickly on the scene.

In addition to being signed by the artist and hand numbered, each print in every edition has been personally signed by a B-25 Pilot that flew bombing missions in Southern Italy: 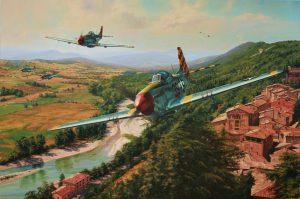 In December 1943 the 325th Fighter Group, the Checkertail Clan, moved into south-eastern Italy to escort American bombers on long range missions deep into occupied Europe. In two years of combat they soon became one of the crack units in the Fifteenth Air Force, destroying a staggering 537 enemy aircraft in the air, and accounting for many more on the ground.

Returning to base after an arduous escort mission, Captain Art Fiedler leads a flight of P51 Mustangs from the 325th Fighter Group – the Checkertail Clan – through the Po Valley in northern Italy seeking out targets of opportunity among the retreating Axis forces, July 1944.

In addition to being hand numbered, each copy in every edition has been personally signed by the artists as well as one of the Checkertails’ top Aces who flew and fought in combat over Italy: