Following heavy fighting that has left the landscape broken and scarred, troops attempt to recover an 18-pounder Gun amidst the mud of Flanders, spring 1918.  Helped by the presence of tanks, the British army has advanced into what was previously No Man’s Land, while overhead Sopwith Camels patrol the newly won territory.

On Friday 15 September 1916, during the Battle of the Somme, a new, unnerving sound was heard on the Western Front; a deep mechanical rumble accompanied by the ominous clanking of metal. Approaching their trench positions on the front line between the villages of Flers and Courcelette, German soldiers could see strange heavily-armored vehicles lumbering slowly towards them.

Traversing the scarred and pitted landscape of No Man’s Land with ungainly ease, the mammoth 28-ton beasts crushed the barbed wire defenses that had, until now, stopped the British infantry in its tracks; targets to be mowed down with impunity. Now, however, all the German rifle and machine gun fire could do was ricochet ineffectually of thick metal plates.

Then these lumbering machines opened fire, spewing death and destruction from two six-pounders and four machine guns. For the first time in the history of warfare an enemy was witnessing an attack by a ‘tank’; and the Germans fled.

Designed by the British as the ultimate weapon with which to break the bloody stalemate along much of the Western Front, these new armored machines had been constructed in great secrecy under the guise of motorized water tanks; and the name “tank” was adopted. Initially they were slow, unreliable and difficult to operate but as the war progressed tanks became faster and more dependable. It wasn’t long before they came to prominence.

In November 1917 the British launched a blistering offensive during the Battle of Cambrai, combining their infantry, artillery, tanks and aircraft in what is probably the first-ever display of wholly ‘integrated’ warfare. Germany responded slowly and the first ever tank-vs-tank battle took place on 24 April 1918 between German A7Vs and British Mk.IVs at Villers-Bretonneux. But by the time the Allies carried out their final offensive through the summer of 1918, they deployed hundreds of tanks which were instrumental in sending the German army reeling, and finally sue for peace.

Following the highly successful release The Front, acclaimed artist Richard Taylor has created another powerful pencil drawing in memory of the Allied soldiers and Tank crews who fought in the muddy morass of the Western Front. With an unsurpassed eye for detail he portrays a scene following the German Spring Offensive of 1918 where, in a landscape left broken and scarred by recent heavy fighting, troops attempt to recover an 18-pounder Gun. Helped by the presence of tanks, the British army has advanced into what was previously No Man’s Land, whilst overhead Sopwith Camels patrol the newly-won territory.

A unique and highly restricted edition!

To honor all those who fought with the Tank and Armored Vehicle Corps during The Great War, the Military Gallery is proud to offer a highly restricted and exclusive portfolio. 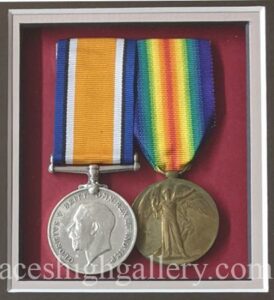 Each copy of No Man’s Land is conservation matted to include an ORIGINAL pair of WWI Campaign Medals – The WWI British War Medal and Victory Medal – which have been sourced and collected over a number of years. Each pair of medals was actually issued to a member of the BRITISH TANK CORPS and have the recipient’s Service, Rank, Name and Number impressed on them.

Fully certiﬁed and authenticated with their history, no two medal groups are alike meaning each print in this extraordinary edition is completely unique and cannot be replicated. With the service record of the recipient included with each set of medals, collectors can further research their history. 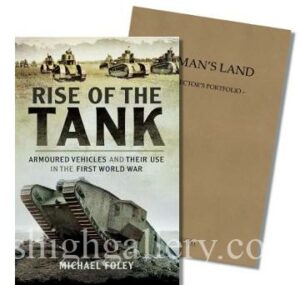 THE BOOK – RISE OF THE TANK

Each matted print is issued with a matching-numbered copy of the outstanding book Rise of the Tank written by military historian Michael Foley. Using a vast array of resources from the Imperial War Museum, The National Archives, the Tank Museum and even a field service pocket book of a 2nd Lt of the 10th Tank Battalion, Foley explores how the development of the tank played a key role in the Allied effort during the First World War. Issued in its own luxury embossed slipcase, this hugely informative book is illustrated with over 100 original images.

Each portfolio is accompanied by an individually printed Certiﬁcate of Authenticity which is unique to each set.

Be the first to review “NO MAN’S LAND” Cancel reply