BATTLE FOR THE ISLAND – THE SEIGE OF MALTA

A powerful piece depicting the bitter fight for Malta and the Battle for the Mediterranean during WWII.

Italian Re.2001 fighters of 2° Gruppo, Regia Aeronautica engage Spitfire Mk Vs of 249 Sqn over the Grand Harbour on the island of Malta, Spring 1942. Desperately needed by the Axis Forces and defended by the RAF, this strategically important island in the Mediterranean became the target of some of the heaviest bombing and most intense fighting of WWII.

Following the Italian Declaration of War against Britain in the summer of 1940, it became clear to the German High Command that taking control of the island of Malta would be crucial if the German and Italian forces were to succeed in North Africa. This tiny British colony in the Mediterranean sat in the middle of Axis supply lines and allowed the Royal Navy and RAF to launch submarines and torpedo carrying aircraft to wreak havoc on Axis shipping, severely impacting Rommel’s desert forces

From June 1940 to November 1942 Malta became one of the most intensely contested and heavily bombed areas in the world. The Axis resolved to obliterate the island or starve its people into submission, and Malta came under continual day and night bombardment from the combined strengths of the Luftwaffe and Italian Regia Aeronautica. But the Axis forces were not prepared for the sheer determination and resolve of Malta’s defenders and its people.

Desperately keeping their worn-out Hurricanes flying, the RAF pilots continued their fight against Axis air and naval forces, despite German and Italian air superiority. Severe rationing hit morale, but the island held on.

Finally in March 1942 Churchill ordered the latest Spitfires to Malta. Supported by the US Navy and American Merchant ships, the island was supplied with Spitfires from HMS Eagle and then USS Wasp in April during Operation Calendar and, while many of these fighters were soon destroyed, more were supplied in May and June. Although still heavily outnumbered, the men of the RAF were gaining air superiority – the tide was beginning to turn.

When the Battle for Malta effectively ended in November 1942, it was a significant victory for the RAF against truly overwhelming odds, just as the Battle of Britain had been two years earlier. The RAF’s desperate fight to retain control of this tiny Mediterranean island, and the defiant courage of the people of Malta, is one of the epic stories of WWII.

This powerful piece by John Shaw, one of the world’s foremost Aviation and Military Artists, is reproduced from his original work in graphite, capturing the ferocity of the air war over Malta when the Axis air forces were at their maximum strength.

With editions including the original autographs of Pilots who flew with the RAF, Italy and Luftwaffe over Malta and the Mediterranean, this stunning edition represents a historical account of this crucial and decisive period. 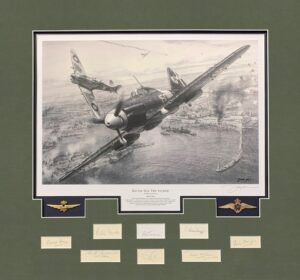 Limited to 25 copies worldwide, each print is conservation matted to include reproduction RAF and Italian Regia Aeronautica Pilot’s Wings, along with the original autographs of eight fighter pilots who flew over Malta and the Mediterranean. Included are Aces from the Italian Air Force, the RAF and the Luftwaffe: 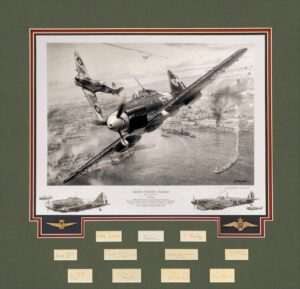 Each remarqued print is conservation matted with all of the components of the Collector’s edition but includes the original autographs of a further three Fighter Pilots who flew in Malta and the Battle for the Mediterranean, creating an exclusive eleven signature edition:

Renowned for his meticulous detail, John is able to capture in pencil, exquisite works of art that are simply breathtaking, making his remarques highly sought after collector’s pieces.