Autumn 1916 – after intense fighting along the Somme, German infantry briefly rest behind the sturdy walls of their fortified front-line trench.  Whilst some keep their eyes trained on the battle-scarred landscape beyond, their colleagues find time to relax alongside the unit’s pet dog as a pair of Albatross fighters patrol overhead.

To the men of the great armies who slugged it out on the battlefields of Flanders, the clay soil was at best a challenge. But when it rained, as it often did, the ground quickly turned into a quagmire of deep, oozing mud capable of devouring man, beast and machine without qualm. And, when the heavens opened, conditions in the front-line trenches were often appalling; illnesses such as the flesh-rotting ‘trench-foot’ were common, lice as much a companion to the soldiers as the plague of rats that swarmed across the duckboards laid to alleviate the worst of the flooding.

Yet compared to the conditions endured by the British, French and Belgians, it was the Germans who quickly established the envy of their enemies with a reputation of building the best trenches of them all. Well-buttressed and reinforced with stout timber and sandbags filled with clay, German trenches were often highly sophisticated with creature comforts such as electric lighting, good sanitation and fortified underground crypts complete with dormitories, sick bays, dining rooms and well-protected food supplies.

Highly acclaimed for his detailed pencil work, artist Richard Taylor has supplemented his already popular series of prints commemorating The Great War with this comprehensive piece, Guarding The Line. Showing great insight into the lives of ordinary soldiers, he portrays troops of the Imperial German Army in one of their well-constructed fortified redoubts situated amidst the zigzag of the front-line trenches.

In the past few months heavy fighting along the Somme has been intense but now that the action has subsided, the men can afford time to rest behind the sturdy walls of their position in the company of the unit’s pet dog. Whilst some keep eyes and weapons trained on the muddy and battle-ravaged ‘no-man’s land’ between themselves and the enemy, their colleagues find time for a well-earned cup of ‘coffee’ but, with the Allies blockading much-needed overseas supplies to German ports, the “coffee” is probably ersatz, made from boiled acorns – nevertheless it’s hot and welcome – as is the presence overhead of a pair of Albatross fighters flying a low-level patrol on the lookout for any unexpected movement from nearby British Army units.

To honor all those who fought in the trenches during The Great War, we are proud to offer this highly restricted and exclusive portfolio.

Every copy of Guarding the Line is conservation matted to include an ORIGINAL German WWI Iron Cross Medal which has been sourced and collected over a number of years.

Each medal was awarded to a member of the German Army for bravery on the field of battle. Sadly, the exact number of these issued during the war is not known after the Prussian military archives were destroyed during World War II. 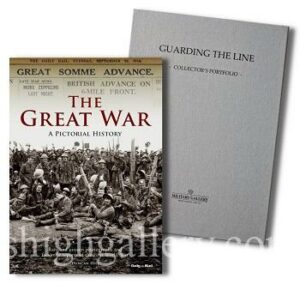 Each matted print is issued with a matching-numbered copy of the outstanding book The Great War: A Pictorial History by author Duncan Hill. Using reports and photographs from the Daily Mail archives and eyewitness accounts, Hill explores how the conflicts developed during the First World War, describing the key battles, tactical decisions and turning points that influenced the outcome.

Presented in its own embossed slipcase, each book and print portfolio is accompanied by an individually printed Certificate of Authenticity.

Regarded as one of the most gifted exponents of pencil work in the industry, Richard Taylor has hand-crafted an original drawing in the lower margin of the print to create a unique collectors piece.

Be the first to review “GUARDING THE LINE” Cancel reply