PLEASE ASK US ABOUT FRAMING THIS PIECE

Major Dick Winters and the men of Easy Company, 101st Airborne Division, take up a holding position in the Normandy town of Carentan on 14 June 1944, eight days after their dramatic parachute drop into Normandy on D-Day.

They have just endured a prolonged and bitter battle to secure the area, and at last the unit can enjoy a brief respite from the hand-to-hand fighting as they prepare for the next phase of their advance into France. Eventually it will lead them through the horrors of the Battle of the Bulge to the capture of Hitler’s personal “Eagles Nest” at Berchtesgaden, and the final liberation of Europe.

THE AIRBORNE COLLECTION WITH EXCLUSIVE BOOK

The print is individually numbered and hand signed by the artist and Four original members of Easy Company – the legendary “Band of Brothers.” 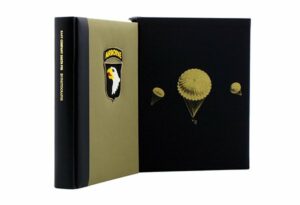 This extraordinary 232 page book, compiled by Easy Company’s official historian Jake Powers, features over 400 rare photographs and items of memorabilia, including maps and diary extracts. The majority of these have come directly from the personal collection of Major Dick Winters, who worked closely in the publication of this outstanding title.

Hand-bound by craftsmen using part leather and M1942 jumpsuit material, the book features a sewn replica ‘Screaming Eagle’ patch on the cover and is enclosed within a black cloth-covered slipcase, silk screened with golden parachutists. The book features special book plates which are personally signed by the following Easy Company veterans:

Together with a 20,000 word text written by the surviving veterans of Easy Company, there are contributions from Steven Spielberg and Tom Hanks who co-produced the celebrated mini-series Band of Brothers; and from actors Damian Lewis and James Madio – who played the parts of Dick Winters and Frank Perconte in the Band of Brothers mini-series. 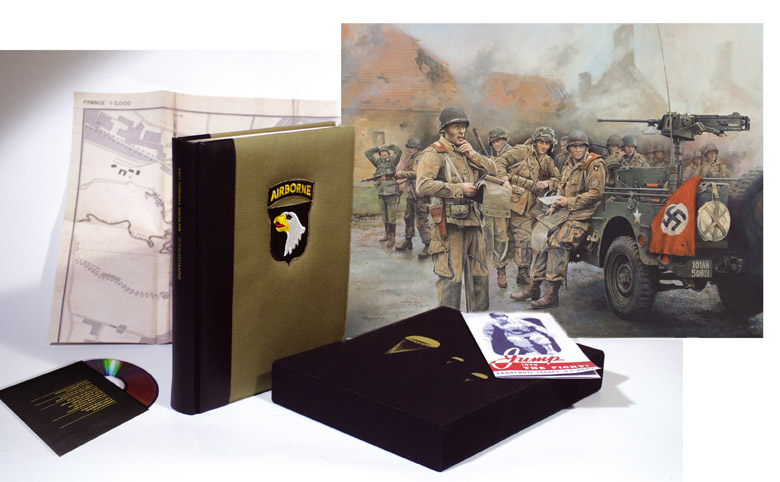 Just 250 of these amazing collector’s sets were produced and have been sold out since its release in 2009. We rarely see them on the secondary market these days, and we have just one available making it the perfect piece any Airborne enthusiast.

PLEASE ASK US ABOUT FRAMING THIS PIECE

Be the first to review “EASY COMPANY, MOVING ON – The Airborne Collection” Cancel reply