BIRTH OF A FIGHTER LEGEND

On the evening of Saturday, May 18th 1940 a young Luftwaffe fighter pilot was part of a force tasked to find, and safely escort back to its base, a German Heinkel reconnaissance aircraft over French territory. The young man’s name was Günther Rall, who would later become the third-highest ranking fighter Ace in the history of aerial warfare, with a total score of 275 confirmed victories.

Rall and his fellow pilots took off from their airfield on this fateful late afternoon, and quickly found the recce plane which was desperately trying to get back behind the lines, with a whole pack of French US-built Curtiss Hawk fighter aircraft in hot pursuit. Rall’s unit immediately engaged, and a short but ferocious battle between the Germans and the French flared up. Rall soon got a chance to align his sight on one of the French fighters, which later turned out to be flown by the exiled Czech pilot Otto Hanzlicek. The rounds fired from Rall’s Messerschmitt Me109E almost immediately sent the Curtiss down in flames.
So intensely focused on his first gunfight was this young fighter pilot, that he had failed to notice Hanzlicek’s wingman who had moved in from behind and was firing at him. Now it was Rall’s turn to take the punches. His 109 was hit several times and spun out of control, Rall had to use all of his exceptional skills as an aviator to recover from the stall.

As quickly as the fight had erupted, it was over. Günther Rall found himself alone in the skies over France with an aircraft that was just barely flyable, but he managed to survive and land at a German airfield that night.

Thus began the career of one of the world’s most exceptional military aviators. His long and hard service career, first for his native Germany, and later for NATO, could well have ended with his very first enemy encounter. But Günther Rall, showing the world a first glimpse of his outstanding qualities as a fighter and a leader prevailed, and turned a near tragedy into triumph.

Each print has been numbered and hand-signed by the artist as well as: 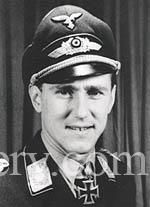 Günther Rall was a young pilot with III./JG52 at the outbreak of war, and quickly demonstrated his natural ability and leadership qualities. He scored his first victory early in the Battle of France, and by July 1940 was leading 8./JG52. After transferring to the Eastern Front his victories soon mounted but he was hospitalized following a crash. Returning to combat as Kommandeur of III./JG52, he gained the Wing’s 500th victory, before being posted Kommandeur of II./JG11 on the Western Front, flying high altitude intercepts in Me109Gs. He was later Kommandeur of JG300, and finished the war as the 3rd highest Ace in history with 275 victories.